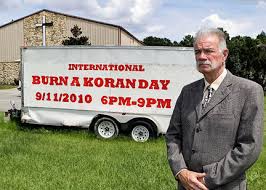 We’ve all read about the American pastor who is planning a ‘World Koran Burning Day.’ The irony is just how close Evangelical Protestantism is to Islam in many respects:
its position on the primacy of Scripture, the position of women and gays, the rejection of a centralised ecclesiastical tradition in favour of smaller groups led by teachers. Perhaps it is their very proximity that makes them such bitter enemies.

The fact that Nazis burnt politically antithetical materials probably won’t bother rightist Evangelicals. Perhaps we should remind them that the banning and burning of religious books – especially the Bible – is more the prerogative of extreme socialists: the various Communist regimes around the world. I doubt that the Koran-burners want to be thought of as ‘pinko lefties.’

If they are genuine Republicans, then they must allow that freedom of religion is a fundamental freedom afforded by the Constitution. Without it, their own assortment of sects and tabernacles would be tolerated no more than Islam: America would still be all-Episcopalian. Oh, the horror!

The opinions represented herein are those of Thomas Plant only.

Praise for The Lost Way to the Good:

“Thomas Plant has written a timely, profound, and trenchant work. He writes with admirable verve, eloquence, and scholarly precision: this is an important book.”

PROFESSOR DOUGLAS HEDLEY, Director of the Cambridge Centre for the Study of Platonism

Welcome to the Prayer Book Platonist. I’m Fr Thomas Plant, a chaplain at Rikkyo University, Tokyo, and Fellow of the Cambridge Centre for the Study of Platonism. I’m convinced that Platonic philosophy can help Christians understand our own faith more fully and engage with other spiritual and intellectual traditions, including Buddhism – and I find Platonic insights preserved in the Anglican tradition of the Book of Common Prayer. You can read more in my new book, The Lost Way to the Good. Since I wrote my doctoral thesis on the comparative philosophy of Dionysius the Areopagite and Shinran, I have been actively involved in interfaith dialogue both in Japan and the United Kingdom with Buddhists and, more recently, Muslims. On this site, you can read some of my homilies, articles for the popular press, and find details of my books. I have written for Living Church, The Mallard, The Eastern Buddhist, Faith and Worship and Third Way. In my spare time, I enjoy practising Aikido and playing piano and the shakuhachi flute.

Naming the Name: excerpt from my new book

In the beginning was the One

A birth, a baptism and a wedding

What is God playing at?